Another year almost over and it feels as though it has gone so quickly that I missed half of it. Yet, here we are, in December, still trying to reduce carbon emissions by sending a group email rather than Christmas Cards. For those of you who don’t get any further than this, we are fine and enjoying life in Kintyre despite the weather! It has again been a year of family celebrations. Weddings must be like buses, you wait years for one and then 3 turn up in a row, or 4, if you include Emma and Jamie’s (Emma being Emily’s long-time uni friend and bridesmaid).

Our own Rubydo in August was great fun. If the weather good we had hoped to hold the main event in the garden in the afternoon, followed by some music and dancing in the Village Hall (conveniently located at the foot of the lane) and if the weather was bad, everything would be in the Hall. We struck lucky! We hired some help, made sure everyone was accommodated in local B&B’s, friends, floors or camping in the garden and crossed our fingers. We really appreciated seeing so many ‘old’ friends making an effort to come from far and wide. The campers enjoyed a fire pit and soft moss to sleep on. For some it was a chance to see the house that we have been rabbiting on about for so long, for others it was a chance for a reunion and for others a chance for a party. Everyone was asked to wear something red which suited the Fynesiders (one of their outfits is a red shirt with white dickie) and to bring a memento which we could incorporate into a garden feature. John’s sister organised the ‘ceremony’ which consisted of John and me answering the questions How Did You Meet? – a version of Maurice Chevalier and Hermione Gingold’s I Remember it Well, What Attracted You to Each Other? – Suse read a song she wrote at the time and John said something that reiterated the sentiments of the first song and How Do You Think You Have Stayed Together? – Goodness knows, but we’re havin’ a party. Our Best Man had another go at his speech and a few others said what they thought of us (nothing too embarrassing!) Then a number of other people sang. There was a bit of mooching about as people chatted and made their way to the Hall where there was a slight delay while ‘they’ struggled to light the oven but the food seemed to go well and the music (Cabin Fever a local 60s/soul band) and Neil and Dorothy’s ceilidh calling was good fun. We got to bed at 3 and started breakfasts at 9!

In September, Joanna, John and John arrived for their wedding at Deer Park in Livingston. Again, people travelled from far and wide to be there but, as John couldn’t resist pointing out, no-one had come as far as the bride and groom themselves, with the marginal exception of Trudy who lives a few streets further from Tullamarine. Both Jo and John overcame their fear of the spotlight and performed perfectly, aided and abetted by baby John who threatened to steal the show when he tried to join in the first dance. (Incidentally, he has just managed to say both Nana and Grandad, so his language skills are fine!) With both of John H’s brothers on Best Men’s duties it was a great double act and despite the inevitable last minute rushes, it was a lovely day and that’s it, we have no more daughters for John to escort down the aisle and no more Coons.

We will however be having a little Birch early next year. Poor Emily has had a rough time of it and had to get herself through matron of honour duties at both Emma’s and Jo’s weddings while feeling sick and exhausted. She is now into the last 3 months and finally feeling well, if tired. Typically she is very well organised and has been researching prams, nappies etc and getting Richard organised with the SEPA equivalent of Freecycle, to the extent that they have masses of amazing equipment that Richard had been rather scathing of. Also, typically they have embarked on ‘one last’ DIY project which is to extend the insulation and underfloor heating into the kitchen, replace the draughty patio doors and generally make the kitchen a cosier space.

Also in September, Richard found himself doing a solo LEJOG. His best man Simon had wanted to do the trip to raise funds for cancer charities after his wife had breast cancer, but while out training he hit a sheep, went over the handlebars and broke his jaw and neck. He is fine now, but was in no condition to cycle 900 or so miles so. Richard couldn’t postpone the trip until Spring, so he had to go it alone. His Dad Steve provided car support through England, then John took the campervan through Scotland where cafes are a bit farther spaced and it all went on schedule with that and other activities raising over £6000. Well done that man!

As for my Mum, her vascular dementia has been accelerating, but with the associated paranoia meaning that she has consistently refused to give Power of Attorney, we were in the unhappy position of having to wait for a crisis. It came the week before the wedding, wouldn’t you know it , with 3 hospital admissions leading to a confirmed diagnosis of incapacity. With no POA she looked set to languish in the geriatric unit of the local hospital until I could apply for guardianship, a process likely to take 6 months. No disrespect to the staff but that is not a good place to be. Fortunately, her social worker was on the ball and slapped a Section 13ZA notice on, which meant they could move her to a nursing home. There being no vacancies at Ardfenaig, which is the nearest one to me, she has had to go to Wellmeadow Lodge at Crookfur. She lost a lot of weight because of not eating and has had a very bad time all round but seems now to be stronger and as well as can be. She wrote some Christmas Cards when I was last there and was chatty and joking, more like herself. But it really is a lesson to anyone and everyone that they should make out POA NOW! It isn’t just for old people with dementia. We hope that she will be able to move to Ardfenaig soon so that I can visit more often as she is now responding well to visits!

What else has been happening this year? Well you might have thought that the worries over Mum and the Wedding and Emily’s not being well would have been enough but in the middle of all this our phone line was struck by lightning which took out the router and computer as well. Other people lost Sky boxes and Playstations as well, so we all had our problems but workwise for me it was a bit of a disaster. As I (the business) couldn’t afford a new computer, I purchased a reconditioned one which promptly broke too and had to be sent back. It feels as though I have spent the 3 months since then constantly setting up computers and email accounts on borrowed, broken or replaced machines each with different operating systems. In fact that has been the most stressful episode of the lot!

The house build is of course finished, or so we thought. Then we were able to add some pv panels to the roof, prompted by the government’s Feed in Tariff Scheme. I have always been unhappy with small scale renewable energy schemes, believing that we should be concentrating on providing effective renewable energy to the grid. However, this just isn’t happening. Wind farms are proliferating but they are not efficient, especially when built in remote places and losing energy every mile they have to be taken to where they are used. So we decided to invest my pension in pv panels and we’ll see how that works out in due course. With the house finished we were able to turn our thoughts to furnishings and we commissioned a set of oak dining chairs from a local artist, and a fused glass panel for the stairway light. Both give us a lot of pleasure. Most of John’s work now focuses on the garden and when he does what he’s told, it’s great! The vegetable garden is rabbit-proofed and finally, the main garden is deer-proofed – although it took some destructive visits from Donny the Sheep before that finally happened. The raised flower beds with seat/walls were constructed in time for the Rubydo although the planting will need a while to mature. As John says, when he looks back on the garden we left at Ballencrieff, which was also started from scratch, he realises that it will come eventually but we will just have to be patient. In common with everyone else, we have found it a difficult year for vegetable and fruit crops, but with mulches, seaweed and digging, things can only get better! 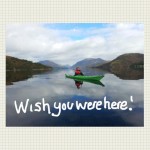 Orienteering has taken a back seat, as we feared it would living here, but we enjoyed the JK in Livingston and Perthshire and the Purple Thistle in Arisaig. We always enjoy it when we make the effort and it’s always good to see old friends again, although fitness is not what it was. We have also not been kayaking as much now that Dave and Ali have Aiden but we have managed a few local trips when the weather has been ‘unexciting’ mostly just snurgling and marvelling at how different places are when viewed from the water.

I am still enjoying work (when the computer lets me!) but am looking for someone to take over Lothian Life when I reach retirement age. Maybe then I can get back to writing novels, although goodness knows it’s increasingly difficult for publishers to know what direction to take these days. Tai Chi still keeps me breathing and I enjoyed Tai Chi Caledonia again in July and a short trip to Holy Isle in October. I now have an instructor’s certificate and am working with an over 65s group in Tarbert. With soon to be 2 grandchildren, maybe I will start knitting again too. Meanwhile John is enjoying his singing with the Fynesiders and relaxing into life in the “Slow Lane”. With the house build over, his main task these days seems to be keeping the log store full and trying to stop the garden reverting to a bog! When the weather stops work in the garden he has his pole lathe out and has been doing a bit of wood carving for Christmas. His home brewed beer seems to be to his taste and he claims that his guitar playing is improving! Recently, he’s been talking about doing one more long hill race, possibly the Bens of Jura, next year but I don’t see him training all that much and at the moment I am doing no more than raise my eyebrows.

We know that many of you have found your own challenges this year and hope that you are rising to them, enjoying them when you can and generally living life to the full. look forward to our paths crossing when they do and send much love and good wishes for 2013. Sorry for the late arrival of this letter. It was sent out before Christmas but didn’t go for some reason. Looks like our battles with technology are set to continue.

This site uses Akismet to reduce spam. Learn how your comment data is processed.